How It Would Strike a Martian

If we were to study the literature of some unknown country and were to discover that all the characters were described as possessing three legs and as preferring the happiness of the uncles to every other consideration, we should be decidedly interested: but if, on subsequently visiting the country in question, we found the inhabitants bipeds like any others, and their feelings towards their uncles quite normal and unimpassioned, our interest would be changed to bewilderment. It would seem to us incredible that a sane people should read vast masses of fiction which showed them as possessing qualities and feelings which they could not help knowing that they never had possessed, and should praise it for so misrepresenting them. We should simply consider those who tolerated such books stark mad. Yet we should but be looking at our own situation as it would appear to an intelligent Martian visiting this extraordinary planet. Take any normal English novel at random, and you will find that it misrepresents life nor merely incidentally, but as systematically as if it assumed that men had three legs. The actions of its characters proceed unvaryingly on certain fixed axioms about human nature, of which no man can live in the world for ten days without discovering the entire falsehood. And yet those who read these novels seem never for an instant to feel the incongruity, though they know perfectly well that these axioms are nonsense, and would generally no more think of acting upon them, or expecting anyone else to act upon them, than they would think of flying. Let me take an obvious example. There is no subject so constantly dealt with in novels as love. How do they treat of it? In nine-tenths of them it is tacitly or explicitly assumed that a man’s whole future invariably depends on whether his love for a particular woman is returned or no. If it is, he lives happily ever after; if it is not, his life is lasted for all time. Yet those who read such tragedies and weep copiously over them would be puzzled to find one single example in real life where an unsuccessful love affair had meant more than about six month’s depression to the sufferer.

Published in The New York Times on Dec. 12, 1903 as taken from The Outlook
Posted by Maxwell Anthony at 7:55 PM

Hello. This post is likeable, and your blog is very interesting, congratulations :-). I will add in my blogroll =). If possible gives a last there on my blog, it is about the OLED, I hope you enjoy. The address is http://oled-brasil.blogspot.com. A hug. 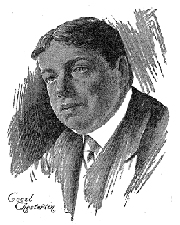